The most debased of human events is happening and most of the world is completely unaware, and that is the targeted destruction of an ethnic people group called the Banyamulenge tribe in the Democratic Republic of Congo,  Africa. Dozens of villages have been burned to the ground and their livestock and crops have been stolen or destroyed. Tens of thousands of people are now sleeping on the open ground or jungle, without food or shelter, fleeing for their lives from the main perpetrating group called the Mai-Mai militia.
​
Preparing A Place Ministries has been working on the ground to help save and bring relief to this people group.
​
WILL YOU HELP OUR RELIEF EFFORTS?
GIVE NOW
All donations are 100% tax deductible & will go directly to relief efforts.
Thousands of people have fled the mounting violence in the eastern Kivu provinces of the Democratic Republic of Congo (DRC) as local militias known as Mai Mai swept across the Uvira Plateau near the border of Burundi. The lawless Kivu states have been a hotbed for militant activity since the Rwandan Genocide spilled across the border into the DRC (then named Zaire) twenty-seven years ago, triggering a civil war which has still not been fully settled to this day.

Villages have been burned, people killed, and a campaign of ethnic cleansing has been underway in the region. Representatives of the Banyamulenge tribe in the United States drafted an open letter to the Secretary-General of the United Nations and the President of DRC last Monday, requesting immediate intervention and humanitarian assistance to prevent a full-scale genocide.

​After the genocide of 1994 and resulting civil war between Hutu and Tutsi tribes in Rwanda, Hutu militia responsible for the genocide of 800,000 Tutsis fled into exile in the Kivu states in Congo, where they formed a militia known as the Democratic Forces for the Liberation of Rwanda (FDLR). The Zairian government subsequently collapsed, leading to the rise of the DRC in 1997. After a quarter-century, the new government has failed to quell the lawlessness and anarchy in its mineral-rich eastern provinces, leading to further tribalization, and providing fertile soil for extremist groups such as the Hutu genocidaires and Islamic radicals to flourish, at the expense of the region’s diverse population. Groups like the FDLR employ local militia (known as Mai Mai) to terrorize and displace the Banyamulenge people, whom they associate with their Tutsi rivals in Rwanda.

​Besides the campaign of ethnic cleansing in the Kivu states, there are ongoing tribal conflicts in neighboring Kivu state, and an Islamic militia from Uganda has also entered the fray, pledging allegiance to ISIS and waging jihad in the eastern Congolese provinces.​ Despite promises from a newly elected government to pacify the Kivu states, the Congolese Army appears unwilling to do so.

​A military base is located near the site of last week’s violence, but there was no effort to intervene. FAI sources claimed that, in some cases, the military is even complicit with the FDLR and their militias, enabling the commission of war crimes in Africa’s longest-running conflict.
Preparing A Place Ministries has been granted access to bring emergency food aid into this remote region where the genocide is happening. Our leaders have delivered sacks of rice, beans, cooking supplies, and blankets to provide immediate assistance to the tens of thousands of people now sleeping on the open ground or jungle, without food or shelter, and fleeing for their lives from the main perpetrating group called the Mai-Mai militia.
​
​(Article credit: FAI Mission)​

Our goal is to raise at least $100,000 for relief efforts.
Give Now
100% of all donations go directly to victims in the DRC & are tax deductible. 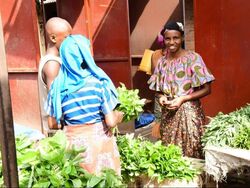 How you can act

We plead with you to contact your local representatives to alert them of this dire situation in Congo.
​
Click on the links below to find your representatives in your state:
Find my governor
Find my senator
Find my Representative
​
Below is a copy of the letter that was sent by Mahoro Peace Association (MPA) and other advocates to the UN Secretary General, which can be referenced when contacting US government officials and helping to bring awareness.

CURRENTLY AWAITING VOTE IN SENATE
An appropriation bill has passed in the U.S. House of Representatives and is now sitting on the Senate’s desk pending vote.  This bill is specially directed to the state department to investigate what is happening to the Banyamulenge people and to ensure that U.S. aid goes to assist minorities including them. Please pray and contact your local senator to ensure that the Senate keeps the same language in the bill and that it passes ASAP.
​
Below is a copy of the Senate Appropriation Bill. See page 86 where the language is provided.